Having lived in this area for over 10 years now, it came as a bit of a surprise to go for a drive a few days ago and discover a place Id never seen before, literally 15 minutes from my home. Theres almost nothing about Creightons Wood on Google in terms of information or location, and judging by the condition of the place it seems as if it doesn’t see many visitors these days. The sign at the entrance is badly rotting, and many of the trees have fallen over and are diseased. Such a shame, as on this mild November morning I had the whole place to myself and didn’t see any wildlife in there, not even a bird (which felt slightly weird!). The woods are hundreds of feet above sea level (which is at Belfast Lough below). As the wind blew that morning it made an eerie wailing noise through the trees, really fantastic stuff. There were many varieties of mushroom growing there too, none Id take a chance on eating however, as I’m not at all educated on all things fungi. But I hope to visit this abandoned and melancholy place again soon.

The old sign into the woods. An old poster of a lost dog remains stuck to one leg of it. I wonder was he ever found?

Trees tower high into the November sky. Not a sound but the wailing wind. 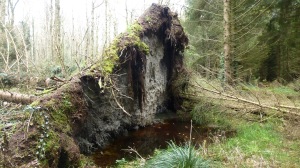 Many trees have fallen over a long time ago it seems. Leaving big pools of dark water where their roots used to be.

Strangely, parts of the woods seemed to be flourishing too however, with a stream here bursting with green leafy life even at the edge of an oncoming Winter.

Another tree sits precariously after falling, and a green blanket of moss covers the foreground in Creightons Wood. 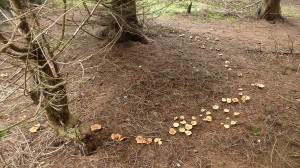 A circle of mushrooms.

Picture taken from the top of a big mushroom.

A fungi giant. If I had know he was edible I would have taken him home.

Looks like someone in the past had placed a piece of old picket fence to cross the stream. 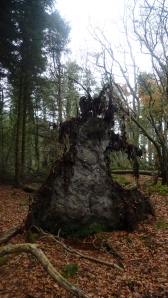 The roots and base of a fallen tree looks like some creepy witch figure here. 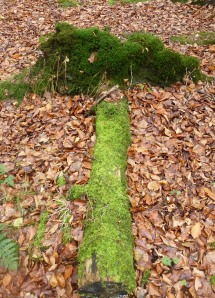 No, not a six foot long piece of broccoli, but a little fallen tree covered in moss. 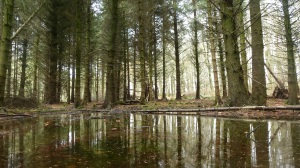 2 responses to “Creightons Woods, North Down, County Down”

Leave a Reply to the Butterfly girl Cancel reply