Ahh June, the sparkling dawn of Summer, although Summer wasn’t too great for us this year, yet September (so far) has been really lovely (an “Indian Summer” as they say here). We were driving along the Antrim coast road between Ballintoy and Ballycastle and stopped off at a little roadside car park that overlooks Carrick-a-Rede rope bridge. This is a pretty popular stop off for tour coaches as the view from here is wonderful. You can also see Rathlin island, Fair Head, and Scotland just 20 miles away in the distance. 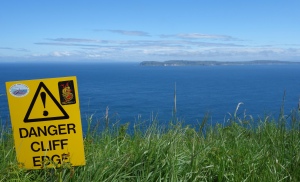 They’re not kidding here as you’re pretty high up at this point and all might not be apparent until you get closer to the edge. There’s a fence separating you from admiring the view from the top, and seeing it as you crash to the bottom 🙂 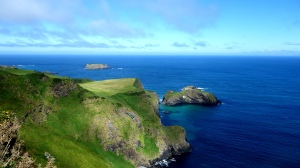 What a stunning sight. Below you Carrick-a-Rede can be seen in all its full glory, with Sheep Island behind it to the left. Sheep Island has an area of 3.5 hectares, and its located 0.5km off the shore. Its designated as a Special Protection Area and an Area of Special Scientific Interest. This is because it contains a number of a particular species of cormorant, whose population amounts to more than 5% of the population of the whole of Ireland just on this tiny island. The island also contains numerous other birds including shag, fulmar, kittiwake, greater black-backed gull, razorbill, black guillemot and guillemot. Access to the island is restricted during the breeding season. If you look to the extreme right of the picture you might just be able to see the Mull of OA on the Isle of Islay in Scotland! 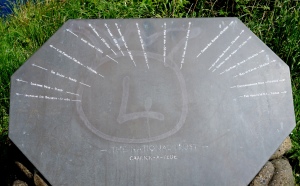 Something in every direction (no, you cant see Iceland from here sadly).

Such a beautiful day and looking in the opposite direction from Carrick-a-Rede  you can see Fair Head (check my earlier post of that), Rathlin Island, and in the distance to the left is the Mull of Kintyre in Scotland made famous by Paul McCartney & Wings in their huge hit song.  https://www.youtube.com/watch?v=AcZVRiB9AQk 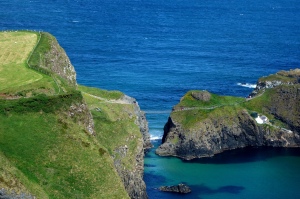 The bridge links the mainland to the tiny island of Carrickarede. It spans 20 metres (66 ft) and is 30 metres (98 ft) above the rocks below. The bridge is a huge tourist attraction and is owned and maintained by the National Trust. It is thought salmon fishermen have been building bridges to the island for over 350 years and it has taken many forms over those years. The current wire rope and Douglas fir bridge was made by Heyn Construction in Belfast and raised early in 2008 at a cost of over £16,000. There have been many instances where visitors, unable to face the walk back across the bridge, have had to be taken off the island by boat.

It is no longer used by fishermen during the salmon season, which used to last from June until September, as there are now very few salmon left. The site and surrounding area is designated an Area of Special Scientific Interest for its unique geology, flora, and fauna. Underneath there are large caves, which once served as a home for boat builders and as shelter during stormy weather. Carrickarede island is the best example of a volcanic plug in Northern Ireland. Marine erosion has exposed a section through the neck of an old volcano whose eruptions about 60 million years ago punched molten rock through chalk.

Along the coast of this area, as with much of the Antrim plateau, the cliffs are of basalt with the characteristic Ulster chalk underneath. At Carrickarede, the ancient volcanic pipe has left dolerite, a tougher rock than basalt, which erodes more slowly. The combination of the hard rock out front and the softer rock behind, with long term erosion by the waves, has eventually left this small island.

If you are visiting Carrick-a-Rede be sure to bring your camera (and a head for heights) and even the walk from the entrance to the bridge itself is stunning.