I haven’t posted anything in a while with a few personal things going on, but new year brings new intentions to get things going again, and as ever, the idea is to show just what Northern Ireland has to offer beyond its troubles of the past and its big ship that sunk in the night. There’s much more to our tiny country than those black taxis around tainted murals, or even the wonderful Giants Causeway. Have a look and see what has lay hidden for decades from most travellers eyes, and where most sights are never more than 120mins apart.

All photos were taken with only my Sony compact camera, so my pictures actually are of what you will see (no hyper-realistic SLR pix here as I prefer to show reality). Heres to a great new year of 2016 and I hope it brings each and every one of you much happiness 😀

The weather in the north of Ireland (in fact all of the UK and Ireland) has been the wettest ever on record this winter, so we’ve barely seen the sun in weeks. Last night however there was a little glimmer of gold as the day began to fade so we went out for a walk along the shores of Belfast Lough and grabbed a few pics.

You cant really see it here, but this is looking across the lough towards Carrickfergus from Helens Bay

A rocky beach between Helens Bay and Seahill 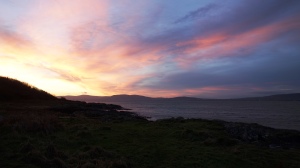 You might just be able to see a little bench to sit on to the left here, but we decided not to given it was very, very cold! 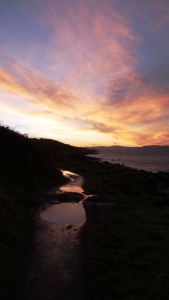 After all that rain, much of the path was muddy and puddled, but it made a nice feature in this picture.