Cave Hill, sometimes spelt as Cavehill, is a basaltic hill overlooking the city of Belfast. It forms part of the southeastern border of the Antrim Plateau. Historically it was known as Ben Madigan, which is derived from the Irish Beann Mhadagáin, meaning “Madagán’s peak”—so named after a king of Ulster called Madagán who died in 856AD.

All of Belfast can be seen from its peak and Cave Hill is thought to be the inspiration for Jonathan Swift’s Gulliver’s Travels as Swift imagined that Cave Hill resembled the shape of a sleeping giant safeguarding the city. 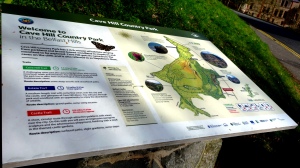 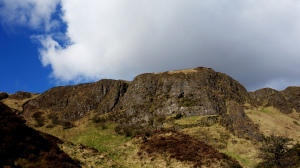 Cave Hill rises to almost 370 metres (1200 ft) above sea level. Most of its lower east side lies on the Belfast Castle estate. The slopes of Cave Hill were originally used as farmland but, from the 1880s, a major planting exercise was undertaken, producing the now familiar deciduous and coniferous woodland landscape. Belfast Castle estate was given to the City of Belfast by The 9th Earl of Shaftesbury in 1934.

There are three large caves. The lowest is 21 feet long, 18 feet wide and varies from 7 to 10 feet in height. Above this is another cave; 10 feet long, 7 feet wide and 6 feet in height. Above this is the third major cave, said to be divided into 2 unequal parts, each of which is more extensive than the larger of the other caves, but the ascent is notoriously dangerous and thus few venture up to it. The caves are entirely man-made, and it is thought that they were originally excavated for iron-mining. 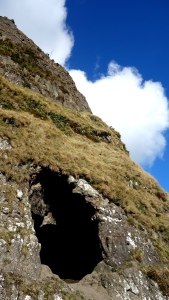 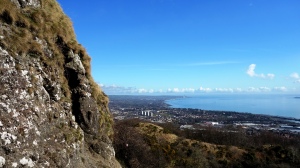 This is the easiest cave to access and the most easily visible from below. The climb up to this point (from the grounds of Belfast Castle) is probably the most tiresome part of the Cave Hill climb but its not beyond most peoples ability. Bring some water if you’re going up in the warmer months (and a coat in the colder ones!). 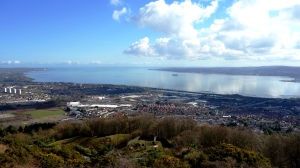 The views from the top are pretty amazing with one side of the water being County Antrim, and the other County Down. You can see all of Belfast Lough and the ship here is the Stenaline service heading for Scotland (the vague shadow on the horizon). The chimney to the distant left of the picture is Kilroot power station which provides electricity for one third of Northern Ireland, and in the bottom foreground of the picture you can see Belfast Zoo (the brown bear cage I think). 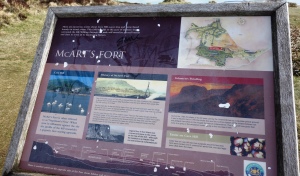 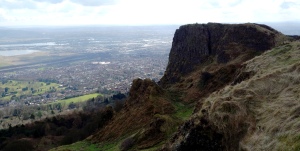 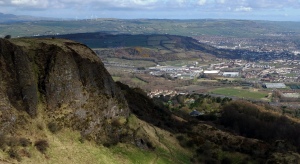 McArt’s Fort on the summit of the hill, is an example of an old ráth or ring fort. It is protected on one side by a precipice and on the others by a single ditch, 10 feet in depth and 25 feet in width. The enclosed area is nearly level. The flat top of the fort is 150 feet from north to south, and 180 feet from east to west. It is believed that the fort’s inhabitants used the caves to store food for the winter and may have served as a refuge during times of attack. If you look towards the bottom of the last picture you can see a cave there. 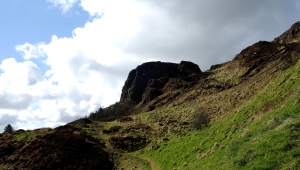 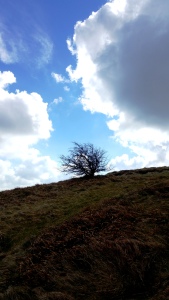 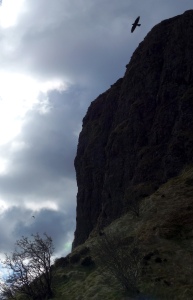 Its certainly a nice trip out here as you get to explore the castle grounds before your climb (even entertain the kids with its adventure playground too) and to have a bit of wilderness so close to a city is pretty unique. Who would have thought, that even in March (and NI) you can get out and enjoy the countryside 🙂

The residential neighbourhood at the foot of Cave Hill’s entrance is derivatively known as Ben Madigan, with street names to match, and is a wealthy semi-outer city, semi-suburban area. The name ‘Ben Madigan’ can also be found attached to buildings, schools etc. close to the area, e.g. the Belfast Royal Academy has the Ben Madigan Preparatory School on the Antrim Road.

During World War II, a bomb dropped during a German bombing raid on Belfast exploded, causing a large crater near the grounds of Belfast Castle. It is understood that RAF Bomber Command was situated on Cave Hill in the early years of WWII before relocating to Castle Archdale in County Fermanagh. On 1 June 1944, an American Air Force B-17 bomber crashed into Cave Hill during heavy fog, killing all ten crew instantly. The incident inspired Richard Attenborough’s film, “Closing the Ring” and some scenes of the film were shot on Cave Hill. 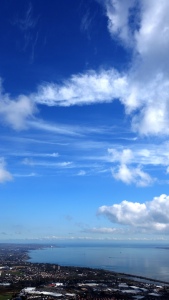 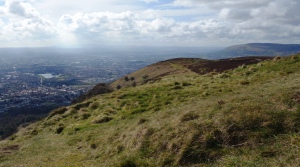 One for you cloud spotters, and the rolling Belfast hill walkers.