The Craigmore Viaduct (Irish: an Tarbhealach Craig Mór, meaning “the great rock trans-way”) is a railway bridge near Bessbrook, County Armagh, locally known as the 18 Arches. Near Newry railway station.

The bridge was designed by John Benjamin Macneill, an eminent Irish civil engineer, with construction beginning in 1849 for the Dublin and Belfast Junction Railway. The bridge was formally opened in 1852. It spans the valley of Camlough River. The viaduct consists of 18 arches of 60 ft span, the highest being 126 ft, making Craigmore the highest viaduct in Ireland. It is around a quarter of a mile long and was constructed from granite stone blocks from the nearby Goraghwood quarry near Goraghwood station, which for many years supplied ballast to the Dublin & Belfast Junction Railway’s lines.

A beautiful day underneath Craigmore 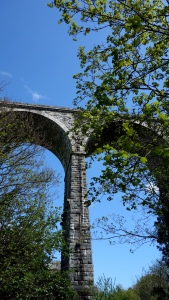 The Dublin-Belfast railway line crosses the bridge. From 1885 to 1948, the Bessbrook and Newry Tramway ran under the viaduct. On 2 March 1989, a Provisional Irish Republican Army bomb damaged Craigmore Viaduct, exploding just four minutes before a passenger train from Dublin was due to leave nearby Newry Station. A clearance operation had to be mounted and the railway line was closed and not reopened until 8 March 1989. 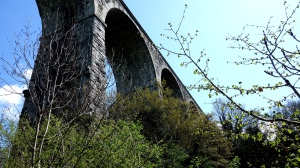