Its maybe hard to believe, but Northern Ireland was once short of water so someone decided to build a big storage place to gather all the rain that keeps falling on our heads for 364 days of the year (it seems) and they called it Silent Valley.

Silent Valley now supplies water for most of County Down and Belfast and it was built between 1923 & 1933 using a workforce of over 1000 men – 8 of whom died in the process. Its situated near Kilkeel and the water supply to fill the dam included diverting a river from Annalong which meant they had to tunnel a 3.62km hole through one of the Mourne mountains (Slieve Binnian) which was an amazing feat lit by using just candlelight.

Today, Silent Valley gets 50,000 visitors a year with most coming to experience the stunning views and make use of the many trails and walks around the area. The park has an information centre, a conference centre, and an education centre, all set inside some old bungalows (see below) and there’s a cafe there too. The famous Mourne Wall also cuts through the park which was constructed to mark out the catchment area for the Silent Valley dam. Its maybe not as good as the one in China but its still pretty impressive when you see it fade off into the distance.

After parking your car (its £4.50 entrance fee for a car full of people at time of posting) you walk along the path before arriving at the information centre above. Nothing too impressive yet.

Some information on the dam. Apparently the valley used to be called Happy Valley but its not certain why the name was changed (one idea about this is on the sign above). It really is incredibly quiet up there though. Spot the 2 crane flies. 🙂 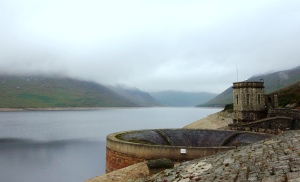 Your first view of the dam. The water was below the overflow level on the day I visited which drains excess water off via the circular construction thing you can see on the right of the picture. I’m not sure where the water goes when it disappears down the hole (maybe its how the devil gets his shower water) but if you want to see it in action there’s a small video here: https://www.youtube.com/watch?v=MxUEfQd4mk4 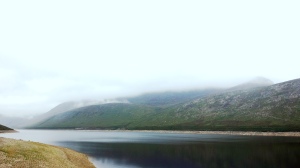 A little bit of back story about the men who built the dam. They even had their own workers village called “Watertown” and you can still see some of the old foundations of Watertown next to this sign. 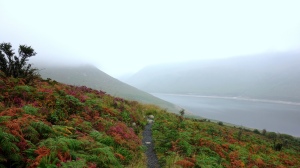 There are 5 walking routes around Silent Valley with one to suit every ability. I did the “Mountain Trail” (3.4km) route which is considered moderately difficult but it really wasn’t that bad. It gives good views over the reservoir from the left hand side of the water (as you come in). This picture was taken from near the top of the mountain trail.

As you descend from the Silent Valley mountain trail you’ll reach the Mourne Wall which usually becomes a feature of many of the Mourne mountain range walks given its meandering 22 miles of length. Its always stunning to see it disappear off into the distance. 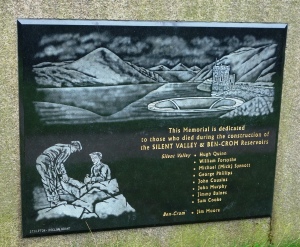 And finally, a little plaque in memory of the 8 men who died in construction of the dam (and one at Ben Crom dam too).

Hares Gap is one of the easier walks through the Mournes and like most its quite accessible too. From the road you would hardly know its there but park up at the Trassey Road car park and climb over the stile (or just open the gate) and follow the path into this part of the Mournes.

You can park your car either in the car park a little up the road from this sign or at the side of the road (fold your mirrors in its narrow passing here). The second picture is taken off an information board at the car park. 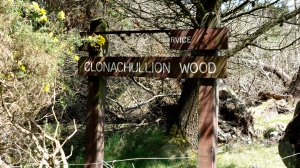 After you climb over the stile (or open the gate) follow the road past some obvious deforesting that’s taking place. I’m not sure what this old wood looked like during its finer days, but Clonachullion is no more. Maybe there was some disease in there and he had to go. Anyway, marvel at the piles of timber as you pass by.

As you turn the corner past the wood you’ll catch your first glimpse of the beautiful Mourne mountains ahead. The sign warns of weather preparations required at certain times of the year but today it was just wonderfully warm.

I’m not sure what fate befell the young boy whos memorial is placed here, but 20yrs ago (this year) something bad happened during the trek ahead, pay your respects and enter through the gate and admire the view to your right as the wall fades off into the distance. 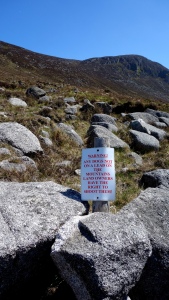 Theres a crystal clear mountain stream here tumbling down the hills which I suspect is fine to drink, but even if its just to splash your face or dip your toes in (to cool down) its still appreciated. On the second picture you can see the Mourne wall on the horizon (the straight bit) which is the back side of the wall we walked up to on the Glen River walk (see elsewhere on the site for that) and you might just be able to pick out an old quarry up to the right as well where they mined granite in this area. On the third picture is an ominous warning to dog owners which I suspect has been placed by some irate farmer that’s had his sheep attacked. I haven’t heard of anyones dog being shot, but please keep your animals under control if you come up here. This is private land and you’re only a guest being allowed to walk here.

The magnificent Hares Gap. You can clearly see how the glaciers cut their way through here around 60 million years ago. Since then, man has made his way along this route either to mine granite or to smuggle goods (Hare’s Gap marked the exit point for smuggled contraband including soap, leather, spices and coffee and was carried through the mountains on the backs of small ponies which descended via the Hare’s Gap to the valley of the Trassey River and on to Hilltown – a favourite distribution centre. Today though its just a wonderful location for a fantastic Northern Ireland walk.