I posted (some time ago) a few pictures that I took at the furthest end of the East Strand at Portrush near a place called the White Rocks (named this way because of the colour of the limestone cliffs overlooking the bay) but I haven’t put up any pictures of the actual town area itself. Portrush is undoubtedly Northern Irelands premiere seaside resort with thousands visiting here in the Summer months taking advantage of its two long beaches, amusement rides, and some pretty decent dining too. We visited back in early June this year on a day during the school week, and as you can see the weather was absolutely stunning with very few people there at all – hard to believe, that just a few weeks later, the streets here would be mobbed with families and children. I have to say though, we like it much better when its quiet, particularly in Winter when it takes on a much more melancholy feel yet still retains a wild beauty with the waves crashing onto the shore. Its a great spot for an off season night away and the restaurants here (55 North, The Ramore Restaurant etc) are really excellent and always open. 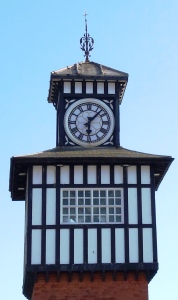 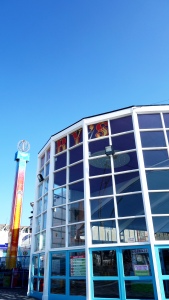 The iconic old railway station clock in Portrush, constructed in mock Tudor style and standing here since the station was completed in the early 1890s. A grandfather clock which stood inside the old station is now on display in Barrys Amusements (the entrance seen in picture 2) which is the largest theme park in Northern Ireland and hits its 90th birthday this year having opened in 1926. Barrys remains a huge draw for all visitors to Portrush and many have fond memories of visiting there as a child (including me) 🙂 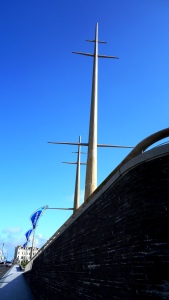 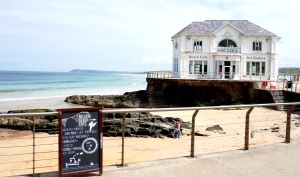 You might be forgiven for thinking the first picture here is some ocean going liner but it is in fact an area right in the centre of town created for sitting down and having a rest with huge fake masts giving the impression of a ship. If you get the angle just right with your camera the effect is pretty good. The second picture is of Portrushs other iconic landmark, The Arcadia, which is certainly the most photographed location in the town being built in the 1920s. It originally opened as a cafe (which it is today) but became a ballroom for dancing in 1953 and the large complex (now demolished) that once stood behind it played host to many concerts in the 70s and 80s seeing bands like The Stranglers, The Undertones, and Ian Dury play there. I remember the building itself even being a roller disco at one point but I guess I’m showing my age here. I have to say I find the Arcadia enthralling, there’s just something about it. If a building could speak it would have some stories to tell in its 90 years of life, and hopefully it has 90 more. 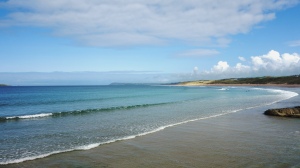 There are 2 “strands” in Portrush (another name for its two long beaches at either side of the town) one being the West, and one being the East. The East Strand (seen above) regularly wins a blue flag for its water quality and amenities and its 2.5miles of gorgeous white sand and huge dunes (search “Portrush” on the site here to see pictures of those) really could compete with any of the beaches in Europe. Its a wonderful walk out here on a sunny day looking out to the off shore islands of The Skerries. Its not uncommon to see Basking sharks feeding along here too with their huge fins being visible from the beach (don’t be scared though, they’re harmless). 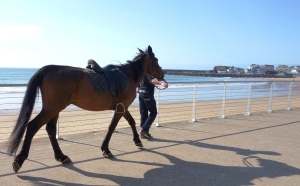 The beach at the opposite side of town (the West Strand) which as you can see from the information sign here has enthralled visitors since the Victorian age. This little horse was out for a walk along the promenade the day we were there. Maybe hes a sea horse. 🙂 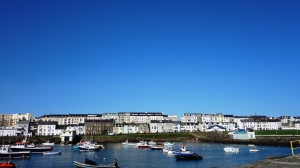 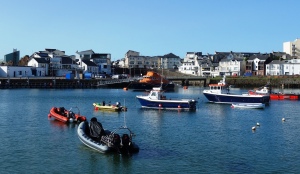 Not a cloud in the sky…. A swathe of Portrush guesthouses overlooking the harbour. The second picture here showing the much lauded Portrush lifeboat which has been the saviour of many a poor soul finding themselves in difficulty in the waters around the town. If you look just to the left of the lifeboat you should be able to see the Ramore Restaurant complex which for many years has had a great reputation for good food when in the town – see here: http://www.ramorerestaurant.com/

Portrush….. A great place to visit. Any time of the year.

So not long now until the premiere of Season 5 of Game of Thrones (12th April 2015) so I thought Id mark that with a little mention of Ballintoy which substituted as Pyke Harbour in Season 2 of the series. A permanent plaque stands there now for visiting fans to read and it looks as if Northern Ireland will be home to the show for a while longer as Season 6 will also be filmed here. Ballintoy is a quiet little village with an attractive small harbour, but walk left around the headland and it has some amazing scenery. There are also some caves you can enter (though you may need wellingtons). 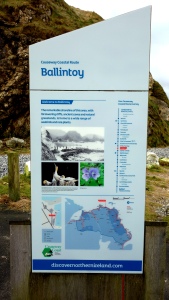 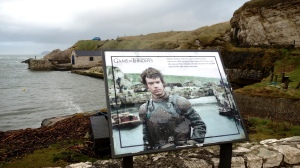 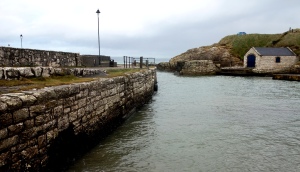 Do you remember this place? Its probably pretty recognizable as Pyke harbour even without the special effects. 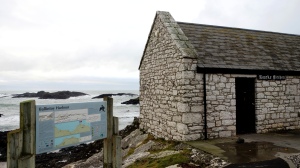 On the left is Roarks Kitchen, which is a little cottage style cafe that’s been serving lovely food here for 35yrs. And on the right is another view of the harbour used in Game of Thrones. 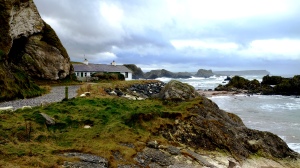 Now follow the path left, walking away from the harbour and past this little house (there’s a cave before you get there you could maybe walk into, though it might have some shallow water in it). 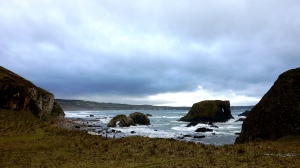 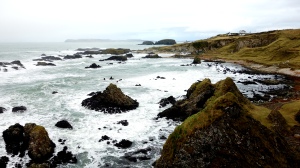 You can climb up some of the huge grass covered rocks (be careful) which have trails left by local sheep. Once at the top of this one, the view back to the harbour is quite amazing (you should be able to see it in the distance here). 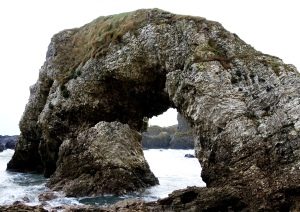 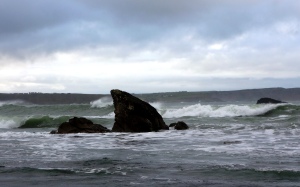 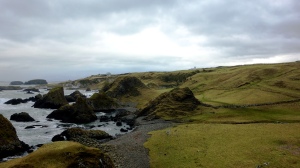 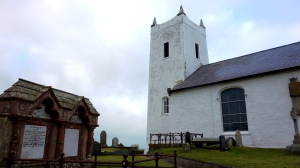 Its easy to see here how vast the immediate landscape is, with all its greenery, yet having a look like some strange alien planet. And in this first picture you might just be able to see a little church on top of the hill. This is Ballintoy church, built in 1813 and seen closer in the second picture. Ballintoy is definitely worth stopping off at if you’re visiting the north coast, even if you’re not a fan of Game of Thrones 🙂

Whitepark Bay hosts a great display of Ireland’s geological past with many fossils scattered at the Southern end of the beach which can be found pretty easily. On the day we were there, we found 7 rocks within 15 minutes containing fossilized remains. The cliffs on both West and East sides of the bay are composed of Upper Cretaceous (Santonian- lower Maastrichtian) chalk. The chalk itself is a form of limestone composed almost entirely of Calcium Carbonate. This chalk formed late during the Cretaceous period, a time when many marine transgressions took place, and much of the continents were under water- as was Ireland. The cliffs at White Park Bay are rich in fragments of the belemnite, a form of early squid. You can spend hours here combing the white beach and examining the little white rocks (the fossils only seem to be in those). The sound is amazing as they roll in and out with the waves. 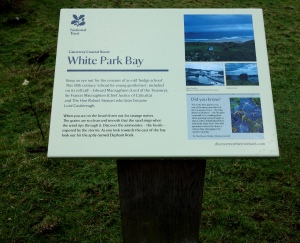 The first sign we saw after parking our car in the car park. 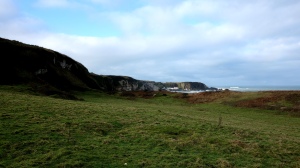 Across the meadow to your left is Portbradden in the distance. 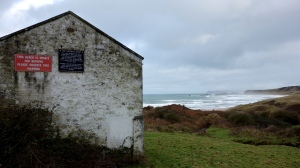 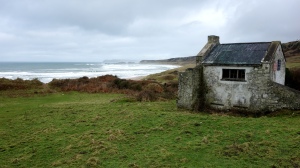 As you saw on the sign above, this used to be an 18th Century “Hedge School” for young gentlemen. Based on the sign on the building now though, it seems some non-gentlemen damaged it in the past. I’m not really sure however what the sign is referring to (to be honest) as the building looks as if its been a ruin for a very long time. Anyway, you’ll pass it on your way down to the beach.

More information on this special beach on the North coast 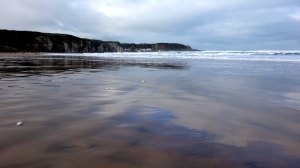 Reflections of the dramatic Winter sky on the wet sand at Whitepark Bay. Portbradden (again) in the distance. 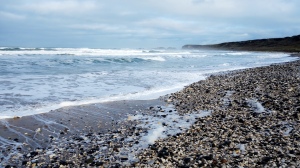 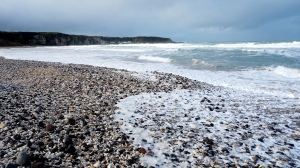 The pictures here probably don’t do the place justice, but when the sun comes out, the beach just glows white. And any one of those stones you see here could contain a real fossil. 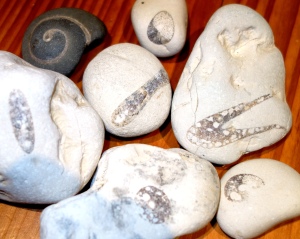 This is a picture of a few we took home. Maybe not the greatest fossils ever, but we found these while hardly even looking. And that shell at the back is actually completely fossilized, its solid stone, (even though it looks just like a normal shell). Amazing stuff! 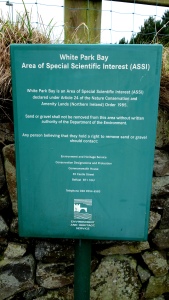 Youll see this sign as you leave Whitepark. I expect it only means you cant take the sand or fine gravel away (not one of the millions of rocks) as the tourist info for the Bay encourages hunting for them. We cant wait to go back.