The important early convent of Killevy was founded towards the end of the 5th century by St Moninna, also known as Darerca or Bline. It remained a house of nuns for almost 1000 years. In 923 the place was plundered by Vikings from Carlingford Lough and in 1146 many people were killed by a great wind that caused damage all over the north. The very long narrow ‘church’ you see below is in fact two churches which have been joined together. The west churches massive lintelled door dates from the 10th century. Monastic life continued at Killevy into the Middle Ages, with the foundation of an Augustinian convent, probably in the late 12th century. There are frequent references in medieval documents, several of them reflecting increasing tensions between church and lay power. 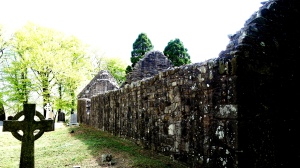 The joined churches at Killevy.

The site has a long history of ancient worship here

The most notable architectural feature is the steeply-pitched east gable, complete with fine coping stones and large window opening. Although many of the cut stones have been removed, if you look closely you can see the small bar holes in the jambs, the fact that they are mismatched showing that the window was once divided by a central mullion. There are also carved heads, both crowned, either side of the window on the outside.

The south wall contains the remains of two rectangular window openings and a small wall cupboard, probably used to hold sacred vessels during worship. There are no windows in the north wall, but towards the east end is a curious lintelled doorway, perhaps intended to echo the west door in the adjacent earlier church but clumsy and unskilled by comparison. It may have led out to domestic buildings, including the house of the abbess where Cunisburgh resigned in 1477, but no trace survives and the area is covered by burials.

Several cut and worked stones can be identified in the space between the two churches, including a large granite slab with a cross in low relief, probably originally used as a grave marker or cover and possibly dating from the 12th or 13th centuries.

Kinbane Castle isnt really a place many seem to know about here, even though it lies between Ballintoy and Ballycastle and is quite well signposted from the main road. We had never stopped here before ourselves and we really didn’t expect much as we pulled into the car park but all I can say is… wow!….. once you discover what this place looks like I reckon you’ll be back. The area is stunning and we were kinda ashamed that some American and German tourists were already here (when we arrived) given we had never even seen the place. Not too much is known about Kinbane, but it didnt last very long after being constructed it seems. The castle was built by Colla of the MacDonnell clan, the clan who also built many other castles and buildings in the area including Dunluce and Dunseverick. The English laid siege to it within a few years of its completion in 1551 as they were getting a bit concerned about the strength of the ruling MacDonnell Clan (and their friendly connections with Scotland just across the water), but the castle prevailed at this point. Another attack took place in 1555 however where the castle was partly destroyed by cannon fire but it was rebuilt afterwards.  The hollow below the castle is known as Lag na Sassenach (Hollow of the English) and it was allegedly during the 16th century that a garrison of English soldiers laying siege to the castle were surrounded and massacred. Fires lit on the headland as calls for assistance were answered by clansmen who came from all directions and surrounded the garrison rolling rocks onto the English below crushing their advances. Game of Thrones for real eh?

Hopefully you can read the information on the 1st picture here (click for large high def) and this second photo is your 1st glimpse of the castle. 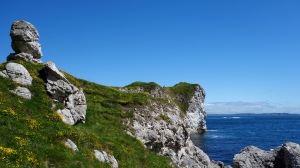 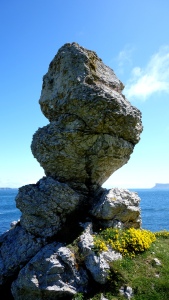 When you arrive at the castle car park you’re pretty high up, and the surrounding area and views are just amazing. Just look at those cliffs (and the beautiful June weather). Thats Fair Head in the distance btw. 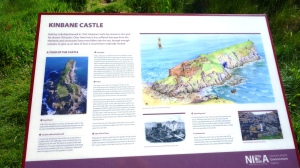 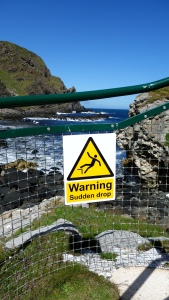 The view of the castle taken from about halfway down the descent to sea level, and when you reach the bottom you’ll come to another sign with more information and a further sign warning of your possible doom haha (erm, and I wouldn’t take it lightly either, if you’re going out to the end of the headland be very careful!) 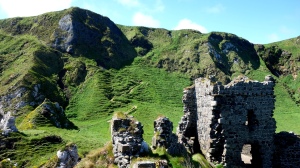 A stunning location for a castle though it was placed here (of course) for strategic reasons. The second picture was taken from inside the tower looking out, and the third picture is of one of the remaining “gun loops” – ie. where they placed the huge cannons (you can see some of the steps down to the castle in the last picture). 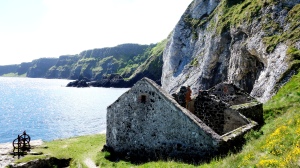 Just below the castle are the ruins of what looks like some old fishery, Im not sure of the history of this, but I expect its a few hundred years old rather than several (like the castle). It provides a nice backdrop to the area however. 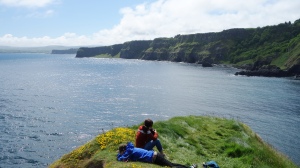 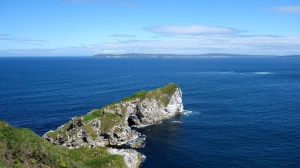 The first two of these pictures were taken from the cliff top behind the castle and in the first one (if you look closely towards the right) you might be able to see some people standing beside the old fishery shown in the pictures above. This will give you a sense of the scale of the place and the heights involved. The people in the second picture are sitting right at the very tip/end of the precipice shown on the third pic. Honestly, this is only for the brave and likely very dangerous in Winter!