Just a few pictures of Tollymore Forest park for now. Tollymore Forest Park is the first state forest park in Northern Ireland, established on 2 June 1955. It is located at Bryansford, near the town of Newcastle. Covering an area of 630 hectares (1,600 acres) at the foot of the Mourne Mountains, the forest park offers panoramic views of the surrounding mountains and the sea at nearby Newcastle.

A stone laid on the edge of the forest commemorating the work of David Stewart. 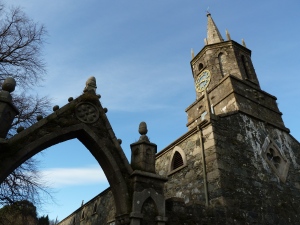 One of the “folly’s” of the park (making a building look like something it isn’t). This is actually a barn, but its made up to look like a Gothic church.

The bridge over the Shimna river within Tollymore.

Another view of the folly above.

Some winding steps near the entrance to the forest.